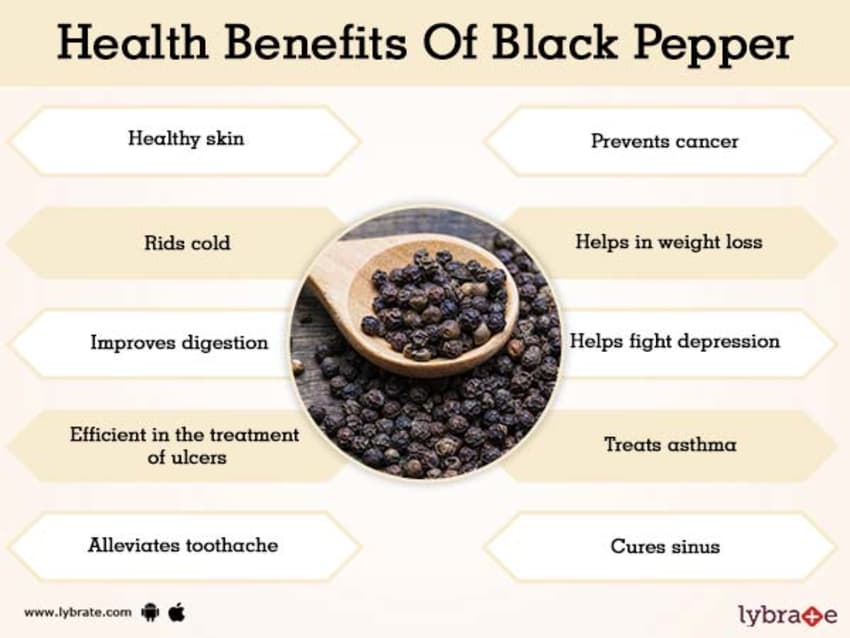 Apart from being a spice agent and a culinary master ingredient, black pepper is also a productive ingredient for the cure and prevention of a lot of health problems. It helps control the blood pressure, heart rate, improves digestion and prevents - acidity, muscle aches and numerous benefits for the skin and hair. It efficiently boosts the human immune system and has antioxidant, antibacterial and anti-inflammatory properties.

Black pepper belongs to the Piperaceae family and grows in tropical climates in the form of woody vines. Black pepper as a spice has a rich history what with voyages being undertaken for its discovery, wars fought over its cultivation, considerable amount of it made as an offering to god and its ownership considered to be a sign of financial superiority. Black pepper apart from enhancing the taste factor of a recipe also adds to it the various health benefits it is endowed with.

Black pepper is highly rich in manganese, iron, potassium, phosphorous, calcium, fiber, copper, magnesium, carbohydrate, protein and vitamins – riboflavin, K, B6 and C. Black pepper has carminative properties which help in breaking down fat and preventing the formation of intestinal gas. The aroma of the spice is owing to the presence of monoterpenes like pinene, limonene, mercene, sabinene and terpenene. Piperene is an alkaloid present in black pepper that has been proved to cure a skin disorder that causes pigmentation of skin.

Black pepper is very efficient in the treatment of vitiligo which is a condition that causes some areas of the skin to become white in colour due to loss of pigmentation. Piperine present in black pepper is combined with ultraviolet light therapy to impart treatment; this mode of treatment is a better alternative to other harsh chemical driven treatments for vitiligo. It also shields the skin from the risk of contracting skin cancer caused due to excessive exposure to the harmful ultraviolet rays. Prepare a face scrub by mixing ground black pepper, unscented massage oil, sugar and orange juice to get an oxygenated glowing skin.

Pepper has been since ancient times been known as a highly efficient decongestant. It helps clear the mucus by making it thinner and watery. Sprinkling some freshly ground black pepper onto your meals helps prevent and tame cold.

The phytonutrients present in black pepper enable the breakdown of fat cells and improve metabolism. Consuming black pepper makes the body perspires which in fact means the elimination of excess water and toxins from the body. However, it is advisable to not consume it in unnatural quantities with an intention to lose weight rapidly.

The piperine enables the stomach to secrete hydrochloric acid which helps in the breakdown of protein and other food components. This helps in avoiding indigestion, heart burn, acidity, constipation and/or diarrhea. In addition to promoting body perspiration, black pepper also promotes urination and stimulates better production of hydrochloric acid. All these factors enabled by black pepper consumption enable the body metabolism preventing indigestion.

The piperine present in black pepper, apart from the numerous benefits rendered to the skin, stomach and body also stimulates the brain functions making it more active and the body more responsive to it. The enhanced functioning of the brain stimulated by piperine has been established to be an impressive method to overcome and prevent depressive thoughts and actions from sinking in.

Efficient in the treatment of ulcers

Black pepper is endowed with anti-inflammatory and antioxidant properties which help to restrict and contain peptic ulcers and gastric mucosal damage.

Due to its efficiency as an anti-inflammatory substance, black pepper is believed to be a good treatment for whooping cough, asthma and other respiratory tract related shortcomings of the body.

Pepper both in the form of corn and oil has been widely used to subside and prevent tooth ache, decay and tooth infections. In the event of a tooth ache a pepper corn is pressed onto the tooth or a few drops of pepper oil is applied on the hurting tooth to relieve the pain and subside the infection.

Due to the expectorant properties present in black pepper, it extends relieve from sinus, cough and nasal infection. Fresh ground pepper combined with honey is considered to be highly effective for mucus infections and bad throat resulting from cold and cough.

Due to the anti-fungal properties, black pepper is highly efficient in fighting infections both internally when consumed and externally, when applied. It is thus also used while soaking and washing laundry to prevent any infectious material from sitting on the clothes. Apart from fighting the sources of infection, pepper leaves behind a distinctive odour which prevents future chances of infection too.

Helps in treatment of Alzheimer’s

Research suggests that regular use of black pepper in the diet of Alzheimer’s and dementia patients results in alleviation of the symptoms.

The reasons for which black pepper can be used so as to benefit the body are limitless. Apart from adding a delicious aroma and a distinctive taste to food, black pepper renders various health benefits derived as a result of the rich vitamins and products present in its composition. It can be sprinkled in the form of a freshly ground powder in salads, soups, pastas, vegetable/fruit smoothies, during marinating of meat/fish/chicken and as a freshly sprinkled garnishing on bread and cookies.

It is advisable for people having had a fresh abdominal surgery to restrict or if possible avoid the intake of black pepper as it causes sneezing and an irritation in the intestines. Black pepper too like any other food ingredient is not to be taken in excess and its use to be immediately discontinued only to be resumed post consultation with a trained medical practitioner if any signs of an allergic reaction due to its intake arises.

Benefits Of Black Pepper And Its Side Effects
Nov 22, 20